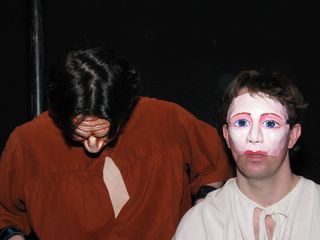 Damn Paparazzi
Posted by Patrick at 10:58 PM No comments:

Hello, and welcome to my head. Or at least the parts I share with guests. It's nice to have you here.

I'm tempted to establish a mission for this blog, but the fact is, I've just started reading blogs myself, and felt like joining the party. Maybe if this ends up being more than one entry, I'll see a grand manifesto forming, but for now, I'm just going to write down the things that are rattling around in my head. I'm assuming anyone reading this is a friend of mine (until I take over the internet), and what you'll find here is the sort of stuff I used to subject you to in my emails, causing many of you to feel perhaps just the teensiest bit overwhelmed. With any luck, this will help me get things out of my system, and allow you the option to read or ignore them, at your leisure, with no pressing sense that you have to reply. Such a deal, huh? So, this is my first entry.

Last week I saw the movie Capote. For the record I highly recommend it; I think it's a compelling story well told, from writing to acting. If reading about movies before you see them ruins them for you, then you might want to skip the rest of this. In the past I have shared elements of a film that I thought were mere details ("and then, the ship sinks!") or common knowledge, only to discover that I had just spoiled a movie for a friend. So, I'm just saying.

Still with me? Okay, like I said, I thought the movie was terrific, but I found myself watching with a strange sense of dread for most of it. It took me a while to identify the source. I knew early in the movie that I didn't much care for Capote himself. Philip Seymour Hoffman is wonderful, he deserves his Golden Globe and SAG award, it's not that, I mean I didn't like person. This isn't too surprising. He's portrayed as an emotional vampire, charming and seducing anyone who has something he wants, lying through his teeth as needed, taking advantage of people's vulnerabilities in his drive to create his book. Hell, he all but promises to save the lives of guys on death row, how low do you have to go?

Then there's his snobbery. He unabashedly embodies the East Coast Intellectual, and he does it in exactly the ways that tends to make the rest of the country hate that person. He's openly condescending, frequently contemptuous of people's feelings, and more than once we see him laughing at people behind their backs, ridiculing them for their earnestness or naivete. For some reason I can handle it when someone ridicules pomposity or arrogance, but it really bothers me when simplicity or innocence is the butt of the joke. Yes, he turns his wit on himself sometimes too, and there are clearly times when his connection with others is sincere and heartfelt, but too often I felt I was seeing a master manipulator in action, whose only concerns were to finish his damn book, solidify his fame, and have hilarious stories to share at parties.

I'd say none of this is particularly insightful, it is in fact the story I think we are meant to see. So why did I watch it with a pit in my stomach? By the end I had it figured out; I felt personally responsible for Capote's behavior. I believed his actions reflected on me.

I'm sorry, what? Yeah, I know. But I did. I felt at some level that society at large would identify him and me as members of the same tribe, not just by being gay, but also by living in New York, working in the arts, caring passionately about words, and books. The fact is I feel just as alien (or just as native) in that world as I do in the midwestern town where I grew up (Red State big time), Seattle, or even Dublin. I tend to feel like a fish out of water most places frankly. But somehow I knew that most people, especially the good Kansas folk portrayed in the movie, would have seen me as a bird of Capote's feather, making his bad behavior my responsibility.

Obviously this discovery was all it took for me to get over it. But I realized that trigger, the desire not to be aligned with 'bad' homosexuals, is still a part of my make-up. And it's not evil gays, really. I didn't feel this way about Matt Damon's murderous Tom Ripley, or Jude Law's criminally spoiled Bosie. Why did Capote trigger it? Is it just because he was a fussy, effeminate, neurotic, needy, selfish little man? Would I have cut him some slack if he didn't have that VOICE?

But this revelation wasn't the only one I had about the character of Truman Capote. East Coast liberal intellectual snob... that started to sound familiar. Then it hit me; this was how George W. Bush painted John Kerry in the 2004 elections. Despite having virtually the same pedigree and education, despite being a draft dodger to Kerry's war hero, GWB turned Kerry into TRUMAN CAPOTE. And the sad thing is, Kerry bought into it. He made certain to be photographed skiing, wind-surfing, tried to talk about sports, he accepted the premise of the assertion, and just set about denying it.

Is this what cost him the election? I don't know. I doubt it. And let's not forget, he lost the election by a hair, no matter how much GWB wants to believe he received a mandate. But it seems clear to me that the spectre of the effeminate homosexual is still looming over the American male, and the pressures to avoid identifying with him are coming from all sides. It's an interesting time where some forces are enraged by the 'raping of the Marlboro Man' in the form of Brokeback Mountain, while others of us (or is it just me) are still apologizing for the fussy Queen.
Posted by Patrick at 10:49 PM 1 comment: