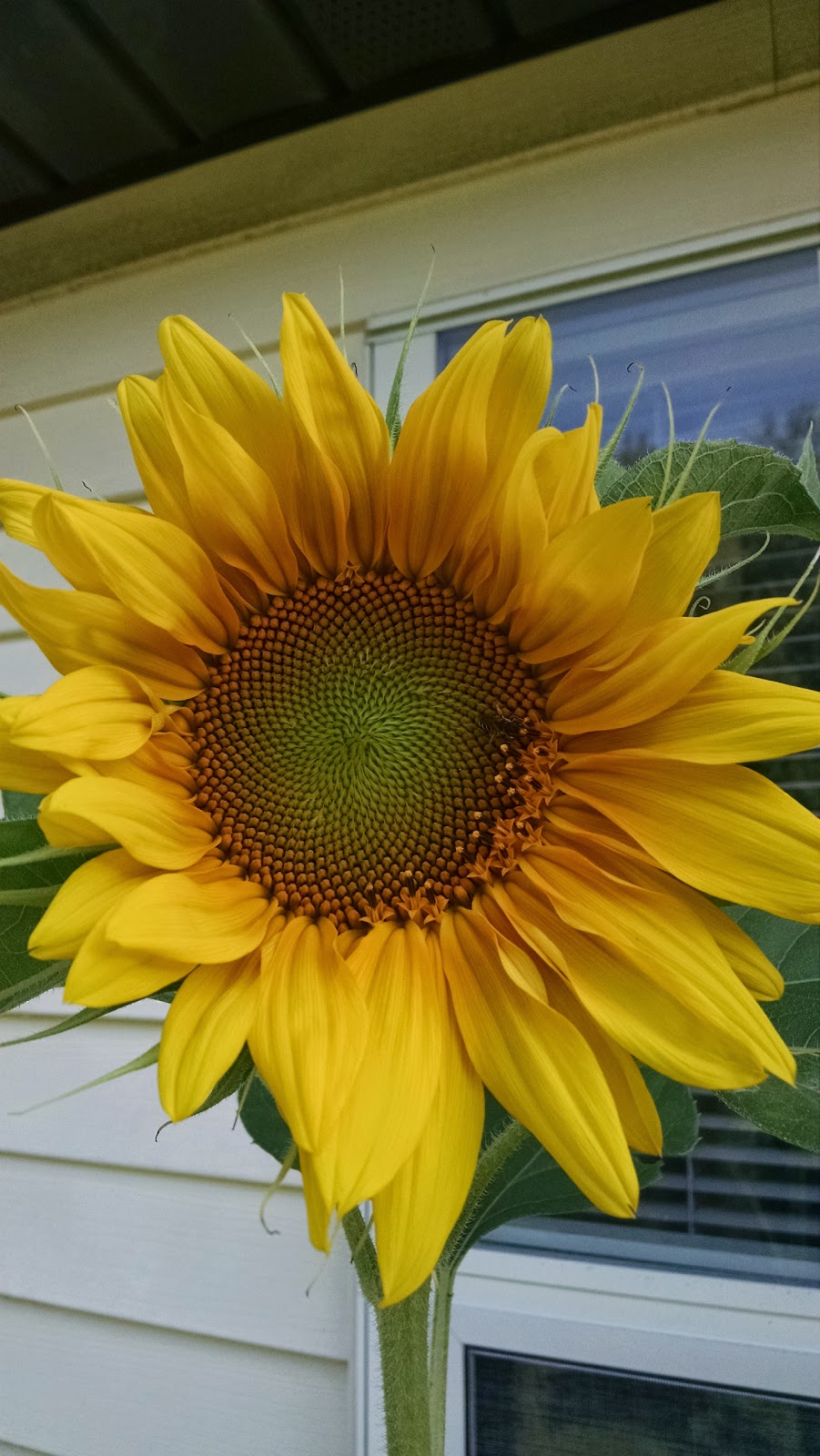 While most of last year's crop of sunflower seeds were fed to the birds, I saved some for planting this year. On two or three different occasions I put some in places I thought would make a sunflower happy, but to be honest,  didn't keep good track of where they were. I left the weather in charge of watering them, and was pretty lucky on that front; it was a wet spring, but not overly so, from what I could tell.

I've mentioned before that my interior design style is best described as "ya done with that?" Even now when it's not the financial necessity it once was, I'm still likely to accept free things friends are getting rid of, just in case. That's what happened a few weeks ago when someone offered me two blue curtain panels. .

Once they were an option, I realized they would be a good replacement for the ones hanging in my bedroom. Sixteen years hanging in south-facing windows had caused them not merely to fade, but actually tear from sun damage. So I was surprised, as I took them down, to find myself a bit melancholy. They were more woven into my history than I had realized. 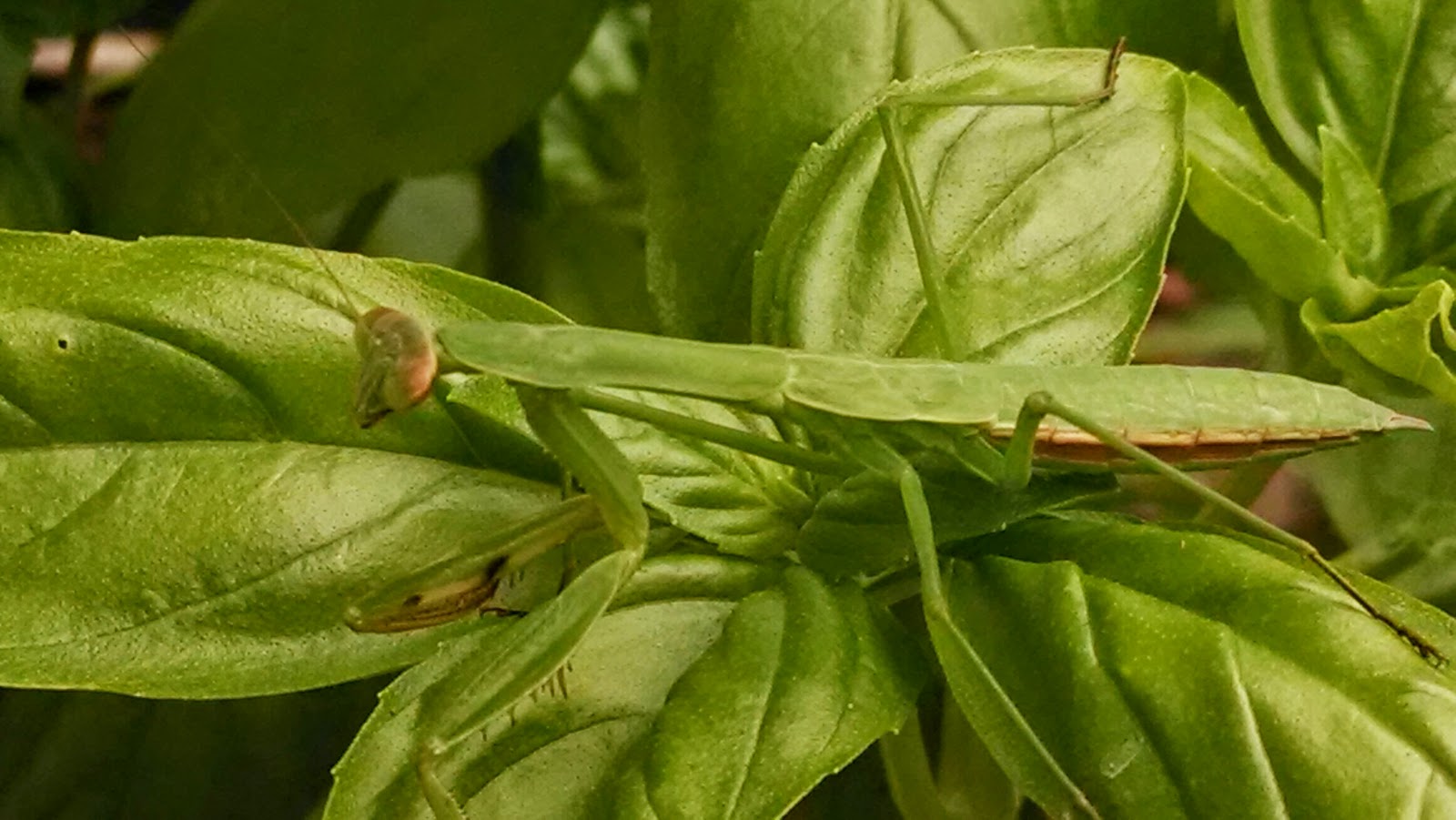 I startled this praying mantis when I cut some of the basil this past weekend. Since then I've checked for it whenever I'm in the vicinity, and it has always been there. I wouldn't have thought basil was especially appealing to insects of any kind, with the essential oils being so strong, but apparently praying mantises and lady bugs are actually drawn to herbal plants. Since both insects are known for eating garden-destroying bugs, I'm always glad to see them around. I also just think they're cool.

Competing for His Affections

When we first met five-year-old J, I thought perhaps I was imagining the spark when she saw Bill. But her father (a college friend of mine)  chuckled and whispered to me, " I think somebody has a crush." It was instantaneous and adorable. Bill loves kids, but often feels out of his element, doubting his ability to connect with them. It was obvious though that J was ready to take him in hand.

This is another in a series that has been forming here over the years without me realizing it: musings on favorite books. Whether it's true or not, on general principle I will say that spoilers abound here, so if such things bother you, don't read this essay. I'll be talking about bird feeders, or dogs, or something else soon. The quotations in the essay all come from:

At one point in The Charioteer, by Mary Renault, Laurence Odell (Laurie, or Spud to his friends) is rereading Plato’s The Phaedrus, a book he has found deeply inspiring since adolescence. When a friend asks him to describe it, he is momentarily stymied for many reasons, but one of the biggest is “it had been a part of his mind’s furniture for years…” (p.108). This is as good as any description of my relationship with The Charioteer. It has been a touchstone for me since I first picked it up thirty-five years ago. Trying to describe that relationship, however, has proven elusive; I doubt I’ll ever be able to do it effectively. I suppose it’s like trying to describe any important long-term relationship. I've probably read it dozens, even scores of times, and almost every reading has revealed something new. I think the book is wiser than I am, with insights that wait patiently for me to see only when I’m ready for them. It has anticipated and marked key changes in my life and gave me hope at key points. I would even go so far to say it had a hand in shaping my ethics.
Read more »
Posted by Patrick at 5:32 PM 3 comments: