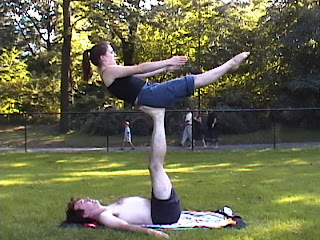 Friend Jeff's most recent entry (go read it now, it's fun) reminded me of an experience I had last weekend. No, I didn't kick anyone in the head (though, OH the times I've considered it recently), but I had a moment where I realized my impulses have been shaped just a tad by doing circus-like stuff.

I was working at an all night art event (no really), where from 7pm Friday to 7am Saturday people came to draw from live models. Ten dollars gets you admission, all the pizza you can eat, and access to various rooms where two or three models pose for varying lengths of time, anywhere from one minute to six hours. The final hour of the event, everyone gathers in one room, all the models get on one stand, and we just... move. The idea is to give the artists the challenge of drawing movement, or catching things quickly, or whatever they want to make of it. For the models, it's a little surreal, I have to say. It's not unheard of for us to be asked to move continually for a class, but it's pretty rare, and what's REALLY rare is to be doing it with twenty other people. Most of us have at least met one another before, but it's pretty unusual to work together, generally a class only wants one model at a time. I know the faculty, even some of the students at this school better than I know the models, and most of the time I'm okay with that because art models are often crazy. More on that in another post, but now you know why I'm not naming this event, or the school where it happened, since both are fairly well-known. Google has gotten me in trouble once already. (Hi Uncle Steven! I'm sorry I called you a groovy California guy fond of twenty minute hugs! In my own defense, that entry made me look worse than you, right? And what's wrong with twenty minute hugs, right? Right?)

Okay, so are you with me on the visuals so far? Twenty-plus naked people of various ages, races, genders and body types all writhing around on a platform that is meant to hold maybe three people comfortably, all of this at 6 in the blessed a.m. when we've been up all night and are just a little bit punchy, possibly in a trance-state due to the African drumming that has been playing since midnight... got it? So, in the middle of this, a guy asks if I want to sit on his shoulders.

This is where the circus impulses come in. I spend a fair amount of time in a world where this question comes up quite a bit, along with others like it. "Will you balance me on your feet? Can I balance you on mine? Would you hold my legs while I do a handstand? If I do a back-flip off this spring-board, would you catch me in mid-air?" Then you answer according to your abilities. Actually I'm making these occasions sound a lot more Noel Coward than they are; most of the time we don't ask, we just say, "I'm gonna do this, ya ready?" So this tall stranger says "wanna climb onto my shoulders" and I say "sure", because that's usually my response to this question, frankly sitting on a person's shoulders is small potatoes, hell, I'm used to STANDING on people's shoulders these days and even that is beginning to feel like small potatoes, even for someone like me who is a rank beginner in the circus world, anyway, sure, let's go, upsy-daisy.
It's not until I'm actually sitting on his shoulders (rising from the center of the writhing mass to a satisfying gasp from the room) that I think, "hmm. Hadn't really thought this through." It's not that I'm generally wearing a huge amount of clothing when I do tumbling or acro-balance, but somehow that small bit of cloth between his neck and my crotch is feeling noteworthy in its absence right now. No, nothing awkward or humiliating happened for anyone involved, it was just weird. At first I thought, "I've never sat naked on another person's shoulders before" then I remembered that time in the swimming pool on Fire Island when we were playing chicken (J. and I TOTALLY RULED), so I amended it to "I've never sat naked on a stranger's shoulders in front of clothed observers before." And funny thing, you'd think that once you've crossed that line, arranging yourself so you're not crushing your testicles wouldn't seem any more outrageous, but somehow at the time it just did. So I didn't. If you follow.
I stayed up there for a while, appreciated the view that I bet no one else has ever had of this room, or this event, then when we'd both had enough, I got down without mishap. No harm, no foul. The rest of the hour we all continued to writhe and periodically touch each other in safe, socially acceptable albeit occasionally suggestive ways. It's amazing what becomes suggestive when you're naked.
There's no real point to this story, other than to echo Jeff's recognition that I too have an impulse to climb or jump on people, and I might want to watch it a bit more carefully. Especially when nudity is involved.
Posted by Patrick at 8:35 AM

Was John Cameron Mitchell there filming said event? Haha. You are one courageous cat Patrick. I wish I could see some of the art works created from the evening.

Oh, I never realized how ridiculously strong your legs must be to balance such a whale on them. There should be some water Photoshoped in coming out of the belly button ;)

Ah, Patrick! Where I am brash and childish, you are graceful and funny. And if I had been at that event, I would have been the naked model sleeping in the corner. But it seeems to me that generally, when nude is the best time NOT to use physical caution.

That is, apart from keeping your eggroll and dumplings safe.

Whale? Brash and childish? What are you people talking about? Meggie, you look fabulous in that photo! Hope it was alright to use it without telling you... Sadly JCM was not in attendance, but it's his birthday on Saturday (according the the Advocate, it's not that I'm a stalker and know these things from my own research). I'd say we should hang out all day at 'Snice in order to wish him Happy Birthday but a) you have two shows that day b)he's probably going to be off somewhere fabulous, with fabulous people, celebrating and c) hanging around all day at 'Snice to see a celebrity would actually cross the line into stalking, I think.
You know, I always feel like I look fat and dumpy in that photo too. Plus the no-chin thang, and the close-ups we did that day show in stark detail the flaws in my skin. So we'll just say that was a bad camera. Except you look good. Dork.
Jeff, what are YOU on about? I loved your entry. Nice image though with eggroll and dumplings. Gives the image a Pan-Asian feel. I'm used the the American franks and beans, or the Irish sausage and two veg. Still, good reminder that nudity is the best time NOT to use physical caution. It's been so long, I'd forgotten... How sad...

I feel like I need to chime in here -
But about the only thing I can chime in with is "I like to jump on people too!"
Although I have no idea if I would feel that way about a bunch of naked writhing people in a small space...
I actually don't even know what I think about that already.

Imaginary Quote of the Evening: "Excuse me? Your testicle is in my ear."

I keep checking...
nothing new...
hrumph.

Kate, Thanks for the quote. My scrotum would have to be the size of a messenger bag for it to be true, however. I'm trying to decide if that would be a good thing or a bad thing. Certainly would make walking hard.

Melissa, is the non-blogging pot talking to the kettle? Sure, you've been fairly regular in the past month perhaps, but let's not get too superior, little missy. Now go read my new entry. xoxo