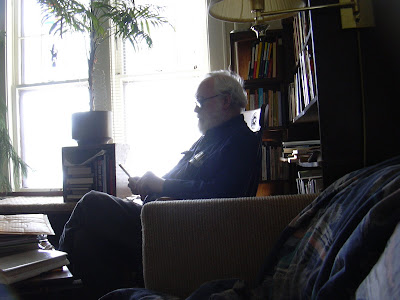 March 15th is my dad's birthday. Sadly I wasn't able to be there for the festivities, I wasn't even able to call during dinner as is my usual habit (fortunately everyone will be gathering at Mary's and Tony's tonight for Irish stew and twice-baked potatoes).

I can be reasonably certain how the party happened though. Dad, Mom, James, Mary and Tony all gathered in the dining room of Laceyland, joined by both the dog and the cat. Everyone held hands for silent grace, with Fang insisting she be a part of it too, so people on either side of her each took an ear. (The cat is largely uninterested in grace.)

The smells of Dad's chosen birthday meal -this year it was roast beef, mashed potatoes, and salad- wafted in from the kitchen, making mouths water (probably all seven of them; even I, who don't really eat beef any longer, would revel in the aroma.) Mom brought it out, James opened the first bottle of red wine, and everyone set to. In amongst talk of everyone's day were memories of trips taken, other occasions celebrated, a lot of wonderful meals remembered. We talk about food a lot, my family. A second bottle was probably opened, though none of them would drink much more than two glasses. We like being nicely oiled, or as my sister puts it "goofed up," but not more than that.

The volume and speed of the conversation probably rose a bit, but not to a mind-splitting degree. The lights were turned off, and Mom fetched the birthday cake. White cake, chocolate frosting, sliced bananas and frosting in between the two layers, this is Dad's favorite cake, the one fond memory he has of his mother's cooking. That wasn't really her thing. He blew out the candles (with the baby of the family turning 40 in June, any attempt to put the 'right' number of candles on the cake ceased decades ago), and Mom immediately took them off and dunked them in cold water, to save for the next birthday. Some frugal, Quaker farm-girl habits never die, but she takes the ribbing ('run! run! Get them to the sink! Aiee!') with a good nature.

The cake was sliced, tea poured, tonight the rule about seconds on dessert was relaxed, then it was time for presents. Dad has always been hard to find presents for. From what I hear, this is a condition common to dads. Not sure what the hell that is about. It's gotten worse as he and Mom have gotten older, because they need nothing now, and don't have much in the way of wants either. Even books, the fool-proof present in the past, now are chosen with greater discrimination, though the absolutely perfect ones are not by-passed. Mostly he got nice wine, cheeses, other fine comestibles, since those are always appreciated. Second cups of tea were poured, the news watched on TV, then everyone went off to his or her respective homes and evening chores. Part of what made this evening so special is the fact that it isn't that rare. Mary and Tony may not join them for dinner every night, but family meals still happen a few times a week, even if they're not always this fancy. I feel some envy at not being able to participate, but mostly I feel delighted knowing this quiet family ritual is observed so often.

I've said in other entries that trying to describe why you love a person is hard to do without sounding insipid and trite, or resorting to lists of fine qualities. I think that problem is only worsened when you're talking about a parent. I can talk about all the good I've seen Dad do in the world, as a teacher, counselor to students and colleagues, and now as clerk for The American Friends Service Committee, which has him gallivanting all over the world in his seventies, doing things we would have never imagined like going up the sides of mountains in Columbian war zones in trucks with benches bolted in the back... but this wouldn't tell you about his goofy side. I could mention that in hearing the news about Eliot Spitzer he speculated about what one would get for $4300 an hour, and decided he wouldn't settle for anything less than a trampoline and an off-stage accordian player (and comments like these from my parents have long since ceased to traumatize me, if they ever did), but that wouldn't tell you about his ferocity... I could talk about when I was a student at Dad's college, he and I frequently found ourselves going after the same administrators, so my 'teen rebellion' years got to be spent with my dad in the same trenches...but that still wouldn't give you a full picture of him. I might mention his special bond with babies and dogs, his desire to have a pet penguin and baby elephant that he would take for walks, the way he taught us to that literature and art matter in the world, but didn't let us get precious about it (In a copy of The Joy of Cooking he gave me, he quoted Bertolt Brecht, writing "First food, then rights!"), his love of Benny Goodman, Beethoven, the Beatles, Yeats, Keats, Levertov, Austen, Eliot, of dancing... okay, so I'm making that list I said I wouldn't. And I've barely scratched the surface.

Suffice it to say, I think he's been a force of love, vision, humor, and celebration in the world and he's just been a hell of a lot of fun to be around. We have had our problems, of course. Human beings will, after all, and fathers and sons may almost be required to... but in all the ways that mattered, he has always been behind me.

Below is a poem of his that I'm particularly fond of, and perhaps does a better job of showing his character than my scatter-shot approach above. If you're not familiar with the Dickinson poem he's responding to, it's included at the bottom of the entry.


Another Slant of light


This afternoon’s sun is not yet at the horizon,
and it has bathed the unmarked snow fields
a mellow pink. The sun has set a joyful scene, dear Emily,
not like that New England winter light you praised
and mourned, a century ago.


Now more gold has
entered the light, and the snow invites us to urge
the dog’s happy leaps in and out of the drifts. Were
I not too old and stiff, too self-conscious
at looking foolish, I would make snow angels
in the trackless field or roll down the hill
below the meetinghouse. Like the dog, I would bathe
in this light, the brisk cold, the soft-tinged snow.


I always want to dance to that tune,
Emily, all around the room, though it
also makes me look foolish beyond my years.


The day will darken toward more somber hues
and tones when the sun dips below the horizon,
but for now there is no heavenly hurt, no gouging
into the heart to find the meanings. It is cold, it will
grow dark, yes, as always, but now the light
is soft, golden, pink; the snow receives it as decoration,
as barrel-organ honky tonk, splashy
show-off tunes, as the body’s pleasure
in the triumphal, long-shadowed winter light...

(258)
There's a certain Slant of light,
Winter Afternoons -
That oppresses, like the Heft
Of Cathedral Tunes

Heavenly Hurt, it gives us -
We can find no scar,
But internal difference,
Where the Meanings, are-

When it comes, the Landscape listens
Shadows - hold their breath -
When it goes, 'tis like the Distance
On the look of Death -

I have never read a more moving or beautiful tribute of a father from his son. Would that one day my own sons will look on me with the same degree of joy and wit and respect and indulgence and honour and acceptance, and most obvious of all ... love, love and love.

Most happiest of Birthdays, Papa Lacey.

Here's wishing your wonderful father a joyous and Happy Birthday, Patrick! I agree with Cooper that you have captured the proper words of the moment to honor him. How nice it would have been if you could have been there, but I understand the problems with living great distances from kith and kin and a telephone call or nice card sometimes is all we have to offer.

Thanks for the additional poems.

What a lovely post. Sorry I'm a little late getting to it!

A lovely riff, my friend. Memory meets imagination in the slanting light, golden and grateful.

Your dad sounds like a grand old man. I like his poem, too, tender-hued and tuneful. I wish you, and him, his happy birthday.

Beautiful words. Thanks for taking us along for this great family dinner, even if none of us could attend. You've captured it well, I suspect...and done a lovely tribute to your Dad in the process.