Midwestern Joys And a Special Mention for the Cape

Yesterday my friends Marta (My Goodly Heritage) and Julie, after twenty-two years of living in sin (the hussies!) finally decided to make it legal. They and their two children drove to Iowa, where the union would be legally recognized, and they could observe it with some members of their chosen family. There are wonderful photos out there on the internet, and I hope Marta posts some of them on her blog when they return home. Congratulations to all four of you, my dears! May your lives continue to be filled with thriving children, satisfying work, good food, good beer, good books, gardens, choirs, church, friends, loved ones, time alone when needed, and all the other joys great and small that have nourished you thus far. Your marriage and your family make the world a better place. 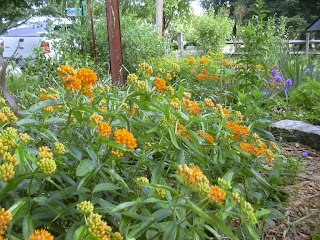 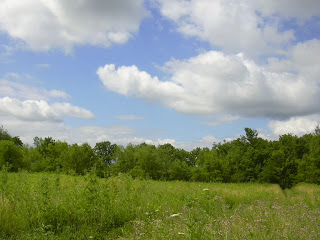 Marta reported a few days ago that they have found themselves at what feels like an all-inclusive resort paradise. I know some of my east coast friends would snort in derision that such a thing could be possible in Iowa, but like both Marta and Julie, I am a Midwesterner by upbringing, so I know what they mean. What's more, I just had reason to rediscover how lush, green and gorgeous Indiana is in June. It's an acquired taste, I suppose, but I was grateful for the healing beauty all around me during such a sad time. 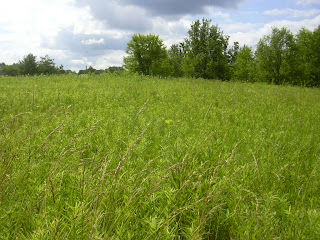 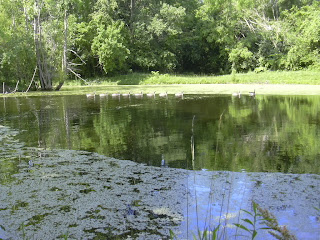 One particularly spectacular day, with cool temperatures, crystalline light and no humidity, Mary and I went wandering back campus with our cameras. We were thrilled to see that this year's family of geese was still intact. All eight goslings were there, and are probably big enough now not to get eaten by turtles. As with all these photos, you can click on this one to get a larger image. I took several, but this is the only one where you can see both parents and all the goslings. 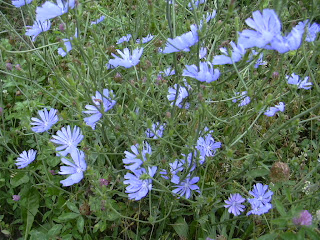 Fields of chicory grow near the football field. In August this area will be awash with butterflies. 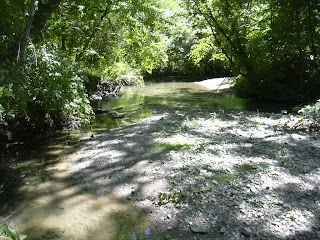 Inside the Earlham Woods. 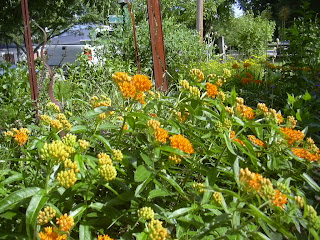 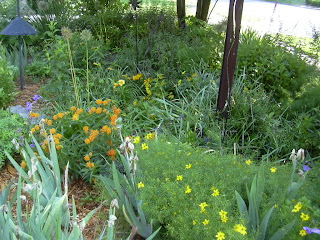 Both shots above are from Mary and Tony's garden. I took dozens of shots, trying to capture the sense of abundance everywhere one looked, but I never quite did it justice. The front yard is going to become even more lush eventually; while I was there, I helped them pull up more of the sod, to make room for more planting beds. It was quite satisfying digging up big strips of grass, cutting them up, turning them over, removing as much of the dirt as possible, saving the worms and helpful bugs, while squashing the Japanese beetles and their larvae (bleah). Having something physical (though not mentally taxing) to do was very good for me. 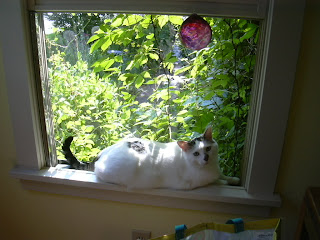 Poor Eddie pines for the outdoors, having forgotten his troubled past. He was completely claw-less when he adopted Mary and Tony, so his days of roaming outdoors are over. 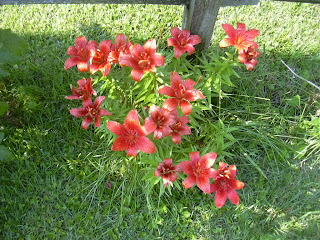 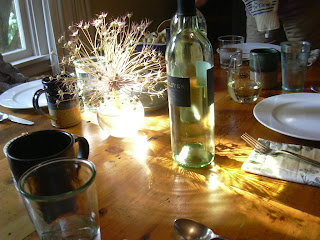 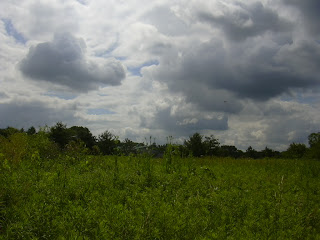 I grew up having easy access to skies like this. Perhaps this helps explain why I need regular breaks from cities; the skyscrapers and such start to make me claustrophobic. Fortunately an hour down by the Hudson can at least tide me over. 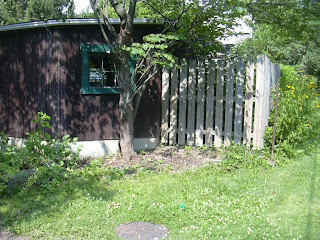 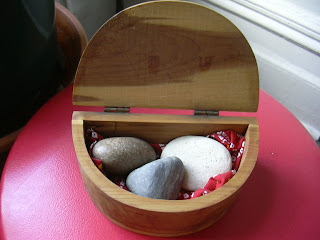 Like most of my boxes, this one was a gift from James some years ago. The unusual shape and simple lines of it drew us both. It was the contents though that moved me.
About ten years ago, give or take, Mary, James and I met up for a week's vacation on Cape Cod. As a family we had visited the Cape a few times before, but this was the first time it was just the three of us taking a trip together. We ate seafood, hiked in the cedar swamp, read, swam, body-surfed, built fires in the fireplace, looked at stars, and of course talked lovingly about how both our parents are quite mad.
We also collected rocks. Mary and James had brought along Sybil the family dog, so at least once a day we would take a walk along the beach with her. While she did her best to eat any rotting filth she could find (horseshoe crab parts were a special favorite) or delighted in scaring the bejesus out of seagulls, we would look for rocks. We each found ourselves drawn to a distinct type. Mary gravitated towards flat stones, the kind that would make good skipping stones if the water had been more still. I found myself noticing egg-shaped rocks. James preferred the 'lucky rocks' meaning they had at least one unbroken stripe of color ringing them, the more rings, the luckier the rock.
(I believe removing rocks from the beach in Cape Cod is, strictly speaking, illegal, so I want it understood I am in no way advocating this flagrant flouting of state law. I am also trusting that the statute of limitations has run out in our particular case. Or that the Massachusetts parks department has bigger fish to fry. That works for me too.) 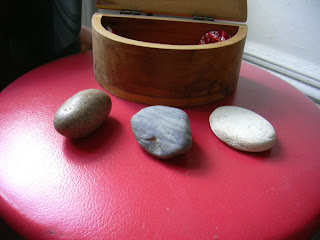 As we packed up to go our separate ways -me back to New York, the three of them back to Richmond- we each culled our collection down to a small handful of favorites. Mary then suggested that we each choose one rock from the other two collections. When I got home I tucked my James and Mary stones, along with one from my stash, in this quirky little box. I'd forgotten I'd saved them. Finding this reminder of happier times was especially welcome this week. It felt like that box was just waiting for me to find it again.
Posted by Patrick at 12:08 PM

i do love thee patrick lacey. the prairie and this big midwestern sky are breaking my heart; i just can't fill my eyes up enough.

tomorrow and monday we'll be in oxford and richmond, visiting barb and susan and the thompsons (and houston woods, site of our first date!) after that i have some time to write, and am looking forward to expanding on some of your themes here.

i hope you are taking good care of yourself. i continue to hold you in the light dear friend.

And I love thee, Dear Marta, and the whole fam. Thoughts of all of you have been bringing me great joy this week. I had no idea Houston Woods was the site of your first date! Be warned, some acres have been turned into another strip mall since we graduated. My family members refuse to patronize any of the stores, and will mutter "hoors" any time they have to drive by it.
I can't wait to see what your thoughts are about marriage and the midwest.
xoxo

I vote for the cork statue. And I want pictures.

In my pining for sunny Florida, I sometimes overlook the chances to explore the beautiful wilderness that is nearby. Southern Indiana especially has magnificent areas in which to get lost. I've visited the caves recently and I still want to go back again.

I wonder if people who don't grow up in a region can really see the beauty of the land in its raw state. I am in love with primitive Florida: the swamps, the scrub, the heat, the light. (Okay, not the bugs.) I need to have the same eyes for Indiana.

Congratulations to Marta and Julie and their children!

I especially like the rocks. They are beautiful in form and in spirit.

How sweet, that the three of you were able to make that special time to share the Cape together. And also, that you have that special box in which to keep such wonderful memories.

The Tweety statue is a brilliant notion, my dear pal. You are a big idea guy, aren't you? : )

Hope you are staying cool.

BTW, I'm not sure which I enjoy more - that globe allium flowerhead as centerpiece, or that wonderful wooden table, or maybe the way the sunlight makes the two dance so delightfully together.

I look forward to seeing the architectural schematics for Tweety.
What a beautiful box of rocks.

Your box of sibling stones reminds me that sibs need outings, keepsakes, sacraments, from which the parents are both excluded, and paradoxically, honored, at the same time. I know you get that.