Priming the Pump: My Director's Notes

Friend Marta was here for a few days of writing, and it was the first chance we'd had in several months to catch up face-to-face.  Both of us had fairly eventful summers, so we had a lot to talk about.  I got closer to articulating some of the satisfactions of the job in Twisp, but much of it is still clogged in my brain.  My talking is only slightly better than my writing these days.  There are a number of reasons for this, I know, but at this point simple atrophy from disuse is probably the biggest culprit. 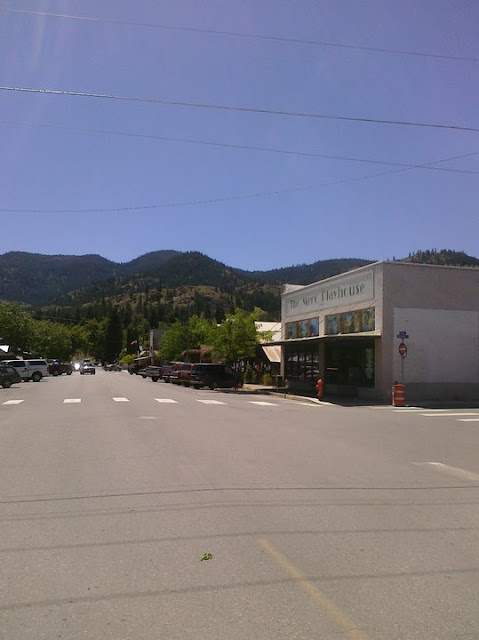 (The Merc Playhouse on Glover St, Twisp, WA.)
So, I'm still plugging away, trying to crystallize the experience at least for my own edification (can't make it happen again if I don't know what 'it' was), and I expect explaining myself here will prove to be the useful tool it's been in the past.  In the meantime, in the hopes of priming the pump, I'm posting my director's notes from the play's program.  Facebook friends will recognize these photos, taken with my shmancy new phone; I'm posting them here for non-FB users (hi Dad!) to see.
June 2009, two days after his 41st birthday, my brother James was killed in a car accident.  In the days that followed, I realized that running through my grief was a sense that such an obvious mistake had to come with an option to appeal.  Something so drastic, so permanent had to include at least one do-over. 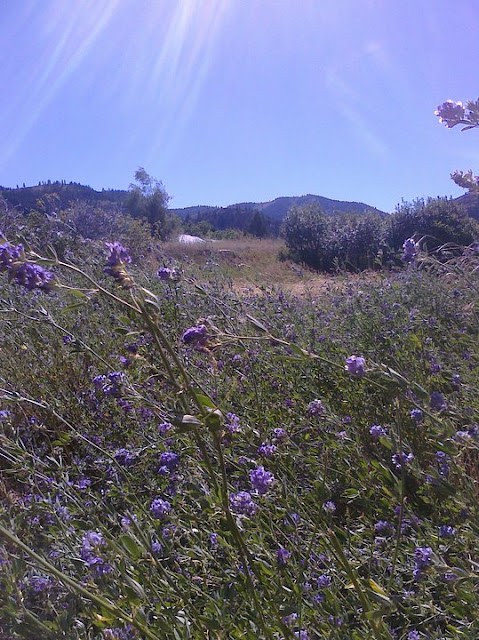 (Alfalfa in Twisp Park.)
It's odd, but undeniable, that something as central to the human experience as death is still terrifying and mystifying, still taboo even to discuss for most of us.  Many, if faced with it before we're ready, may choose the path Mitch Albom takes with his Uncle Mike, which is to run away.  It's his good fortune --and ours-- that he reconnects with his beloved teacher just as Morrie begins a close and personal study of death.  It doesn't take long before they both realize that looming behind the question of how one prepares for death is another, perhaps more daunting question; am I living a good life?  Naturally this triggers a storm of related (and equally daunting) questions.  Do I want the things I'm chasing?  Do I even know what they are?  What place does ambition hold in my life? Is my work fulfilling or diminishing me?  Who are my loved ones?  When did I last show them what they mean to me?
Just to name a few. 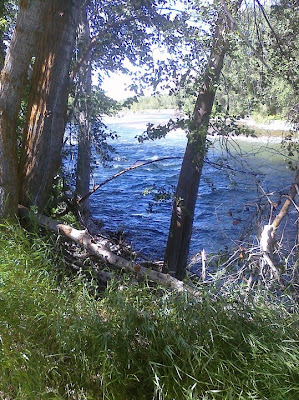 (Twisp River, as seen from the Town Park.)
If you're like Mitch (or me) you may find that as you set off in pursuit of your goals, you got a bit off track.  The demands of daily life can overwhelm and distract us, but a more insidious force may also be at play; when we deny death, it becomes that much easier to deny life.
Kind soul that he is, Morrie doesn't abandon us with these questions, he shares the answers he lived his way into.  Most of those answers will sound familiar; wise and compassionate people have said the same things in every culture for centuries.  Unfortunately so have many movies-of-the-week and Hallmark cards. This makes them easy for Mitch, me, and possibly you to dismiss.  But Morrie finds his way past the sentimentality to the core of the answers, reclaiming their deeper resonance.  Few of us know when we'll die, but we all have the ability to build the lives we want, with humility, humor and --this is key-- the help of others.

That brings up another unfortunate aspect of death; it can easily tempt us to isolate ourselves.  The real solutions, however, lie in community.  And few places lend themselves better to such explorations (or adventures) than does a theatre.

So, that's where I was six weeks ago.  Having a place to work, good people to work with and something worth saying was incredibly satisfying.  Having an audience to connect with was even more so.  That's the topic I've been circling fruitlessly around for days now, but I think I'll be able to make some sense of things soon. 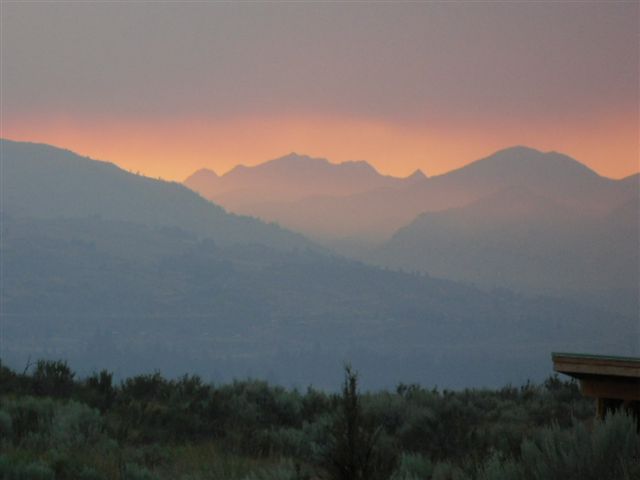 (﻿Forest Fire sunset, as seen from the house where I stayed.)
Posted by Patrick at 2:59 PM