A Top Bound Notebook and a Good Pen 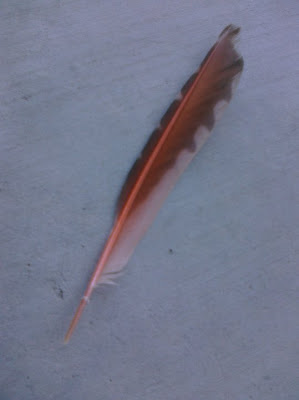 Hey, Jerry. Nice post. I've been thinking about writing a nice long email the past couple of days, but maybe I'll break out a notebook, instead. Dust out your mailbox.

How delightful. I'll get right on that. But let me add that I didn't mean to suggest my friends weren't writing me enough ('you never write, you never call...'). I seem to be as much of a culprit in the disappearing mail/email mystery as anyone.

But of course I look forward to your letter. They're always wonderful.

I discovered the G2 about three months ago, and I LOVE it. I use the mini, which fits anywhere. The nub of the pen just glides, and my handwriting is far more legible. I have fancy handwriting, so ink flow is very important for legibility. The G2 is the best I've found.

This post has already produced one handwritten note to a friend, and I'm considering more. What have you done?

Birdie: by a strange coincidence, as soon as I posted this entry, my supply of bold or medium points dried up here. For about two weeks I couldn't find them ANYwhere, and since I usually found them at Staples (not exactly lacking for space, in other words) this was very perplexing. I tried the fine points, hated them, tried a bold point from a different manufacturer, hated it more, and began to wonder if my search was going to start all over again. But I DID write a note to my mom, the one person who still consistently sends handwritten mails by post, and the very next day Staples had finally restocked. Undoubtedly there is a lesson here. You're a mom, I don't think I need to spell it out, do I? :)

I have been looking for a good pen. This semester has been frustrating because I don't have a favorite pen with which to take notes. Last semester I used the TUL, which is a higher end product, and worked reasonably well, but it thinks too highly of itself and doesn't have a large ink reservoir. If I'm going to pay that much for a pen, it should have enough ink to last a while.

I intend to send you an email. It's brewing in my head right now, and hopefully will manifest in digital form soon.