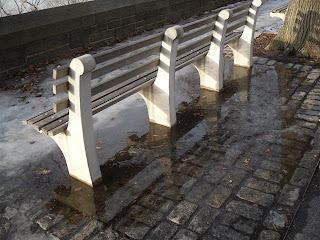 During my first year living in Seattle I was walking one day through the main quad of the University of Washington.  A huge flock of gulls and pigeons were on the ground and circling in the air, squabbling, squawking, making a lot of racket.  Believe it or not, I didn't see gulls that often, especially not that far inland.  Seattle is on Puget Sound, which is salt water that flows directly into the Pacific, but people were very firm with me that didn't mean it was the same thing as the ocean, and consequently Seattle was not on the coast.


Whatever the nuances are of ocean topography, it was true that in the University District, where I lived and worked, gulls were a rare sight.  Seeing this many of them was noteworthy, even without all the noise and activity.  I watched for a while, trying to figure out what was going on.  The obvious explanation --food-- didn't seem to be true.  There was no visible foodstuff nor did the birds seem to be fighting or eating.  The next most likely cause for excitement in the animal kingdom--sex--also didn't seem to be involved.  I speculated that maybe there was some big storm out at sea that had driven the birds further inland.  I never did guess what had brought them there, and gotten them so riled.  As I continued my walk home, I was struck by the thought that I didn't know how to read the natural signs of my new environment.  Culturally I may have been on familiar territory, but ecologically, maybe not so much.

I found this remarkably disconcerting. 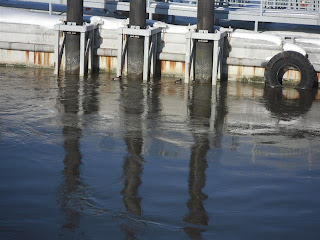 I'm not making any great claims to woodcraft or weather-sense; I was never a boy scout, I didn't grow up on a farm, my ability to read the signs on my home turf are nothing special. If you dropped me into the middle of a local wilderness, the Appalachian Mountains say, I would die of starvation or exposure as quickly as the next tenderfoot. But in my home environment I at least knew what things meant. I expected to understand the flora and fauna around me. Morning walks with my dog were as much about gauging the weather as they were about exercise. I'd look to the west (where the prevailing winds typically originate) to see what the clouds were doing, getting an idea of what weather was coming. I knew what it smelled like before rainfall, or a snowstorm. New fronts, with accompanying changes in temperature or humidity, registered on my skin. The sensation of a cold front breaking an extended heatwave often triggered a powerful giddiness. A pet food factory lies east of my parents' home; eastern winds usually brought unsettled weather, and powerful storms. To this day I still associate freakish weather with an ambient scent of dog food. 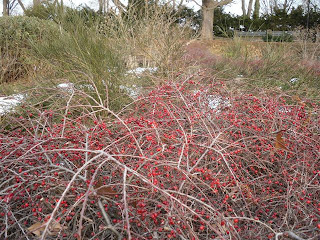 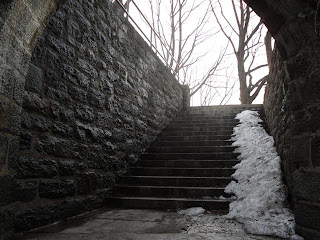 As haphazard and unschooled as my weather sense was, I wasn't even truly aware of having it until that day in Seattle.  The time I'd spent living in London (ages 10 and 14) and Dublin (age 20) I was probably so overwhelmed by all the new stimuli that any weather sense, or lack of same, was just part of the whole discombobulation.  London's size and noise also triggered what I came to see as my urban claustrophobia; I didn't feel at home there, but attributed it to all the concrete and crowding.  Besides, all three stays came with expiration dates.  I knew eventually I'd be returning to Indiana, to home.  Seattle, however, was supposed to be my new home.  I'd gone there to live.  Suddenly it seemed alien in ways I would have never predicted.  Over the next seven years I did get to know the lingo better, but it never ceased feeling foreign. 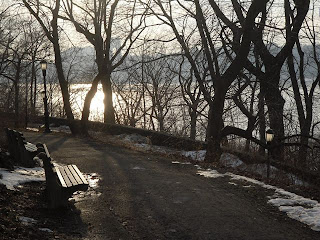 Moving to New York mostly meant coming back to familiar territory. I was happy to have four distinct, readable seasons again, especially cold, snowy Winters and colorful Autumns. Once again I had thunderstorms, fireflies and violets, to name a few. But NYC jams my antennae in the same ways London did. I don't know how to see past all the cement and concrete most of the time. To find out what the weather is doing, I turn on the TV.  My main tool for tracking the seasons is a calender. I plan trips out of town, or at least to the park, when I think it's time for the leaves to turn or the violets to show up. Here in my urban landscape, the seasonal changes aren't waiting to surprise me the minute I walk outside.  I have to seek them out. I have to schedule appointments with them. 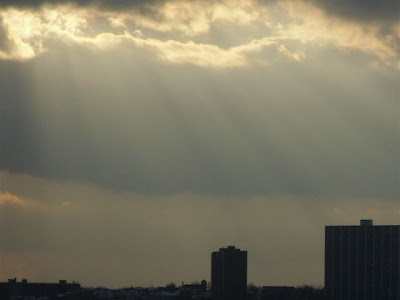 There have been years where I missed some of my seasonal markers.  More than once I missed all of them.  It's even a bit distressing to realize that something has already passed its peak.  I grew up watching things go through their full cycles, from the first crocus peaking through to the last scarlet maple leaf falling.  Now my seasonal experiences feel more like trips to the zoo. 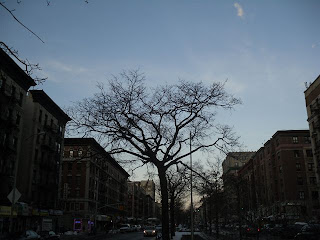 Changes in temperature are almost the only signs that catch my attention by themselves here. Heavy precipitation does it too, of course, though my sturdy pre-War building keeps me from hearing it indoors. Storms have to be torrential--and southerly--to be audible in my fifth floor apartment. (I'm grateful for the good roof on my place, of course.) Occasionally I'll walk out the door of my building and be hit with the sexy, fishy stench of salt water off the Hudson, but that is rare.  Most of the time I can't smell the river even when I'm right next to it. 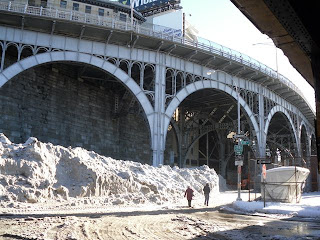 I wouldn't say my minimal weather sense has completely turned off, though.  I think it's just found other things to track.  Given how much time I spend on the subway, it makes sense that I'd start reading its nuances and arcana.  The slightest movement in the air will let me know when a train is approaching long before I see or hear any evidence.  A certain clackety clack on the tracks will tell me that a local train is approaching; if the sound lacks a stutter, it means an express train will be blasting through without stopping.  Unless we are at the Lincoln Center station, where for reasons I've yet to identify, the meaning of the sounds is reversed.

I also notice signals when it comes to groups.  If a crowd at a station feels unusually swollen and hot, like a boil, it probably means there's been a delay in train service, with people piling up and waiting longer than they think they should.  I may be kidding myself, but I believe if you played me audiotapes of such a crowd, I'd be able to tell you if the group was waiting during morning rush hour, evening rush hour, or in the middle of the day.  Big talk, I know.  It's like people who swear their arthritis can predict rain. But I do kind of believe it.

I guess we always strive to orient ourselves to our surroundings.  But as I get older, I wonder if the place we grew up never quite relinquishes its grip on us.  Does the first landscape inevitably establish the archetype?  Is there a place that still lives in you, no matter where you are?  Even if you hated where you grew up, and fled it as soon as you could, does it still always get compared and contrasted to your present surroundings?
Posted by Patrick at 9:57 PM

Comparisons are inevitable; and the homeland you love falls short when I compare it to my childhood home of Florida. Conversely, my husband bemoans Florida's lack of distinct seasons.

The thing I miss most of all is the light. I can recognize south Florida sunlight in many photos, by its angle and clarity. I'm not sure what it is I see, but often I know it when I see it.

You have a strong sense of place and surroundings. The books Last Child Into the Woods, and The Geography of Childhood are good reads for anyone interested in the sense of place-in-nature and its importance to child development.

My imprint of the natural world was made in the Midwest. Big water to me means Great Lakes, oceans. I never felt at home on Long Island at Stony Brook. The smell and foam of salt water, the mudflats, estuaries and tides, so many people with dark hair...it never felt right to me.

I look forward to seeing Orion cartwheel across the still-dark early morning sky. I miss the deep red and orange hues of the Indiana sky at sundown in the summer. I was unnerved by the quiet that followed the West Nile virus epidemic among the crows in the parks around town. My parents call me every year to rejoice in the return of the Night Herons to the same tree for their annual three day layover. I return every year in spring to the same garden of wildflowers hidden in the woods of a public park I ruled as a kid, and pull garlic mustard.

Even though it's made of concrete, a sidewalk is still a trail.

Beautiful post. You know I just love when you find nature's beauty in the heart of the city, so these pics were delightful.

And now that you mention it, I only live a few blocks in from the shore and seeing a gull in our yard is pretty rare. A few times I've thought I heard them out there, but each time it turned out to be the blue jay tuning up for his hawk impersonation. It clears the feeders every time.