The Soul of Evolution 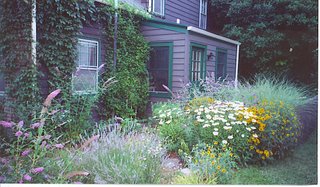 (This is going to be one of those "working it out while I write" postings. Just to warn you.)

Not too long ago I found myself waxing rhapsodic to a bemused friend on the subject of compost. My sister and brother-in-law have a composter in their yard, so I was able to examine it closely this August, and for the first time see the end result. This one has a particularly nice design, because you can see all the stages of the process, like looking at layers of geology; at the top you see all the refuse you threw on it that morning, the coffee grounds, vegetable peelings, moldy bread, fruit rinds etc, and at the bottom you see the rich black, undifferentiated soil. If you didn't know better you'd think it was just a whole lot of garbage sitting on a pile of dirt. I just the love the fact that organic refuse will, with the right mix of elements and time, turn into a rich topsoil that then grows more fruit rinds, vegetable peelings etc. Circle of life and all that. My friend listening was on board with me so far, but when I explained that somehow this was evidence of divinity for me, he tilted his head at me like a confused dog. It's the same look I get from people when I say that the theory of evolution feels like evidence of divinity for me as well. I'm a firm believer in evolution, I recognize that its ability to predict present and future realities just makes it too compelling (not clear to me how anyone can know anything about genetics and NOT at least entertain the theory of evolution; but that's another post). I know that random selection is a central issue to the theory, and that's perhaps the point where atheists and believers most often part ways. I get it. And even if I'm seeing the delicate balance of the earth's resources and residents as evidence of God, then I'm really talking about the divine watch-maker view of the divine, the being who sets up this elaborate interlocking, self-sustaining structure, then leaves it to take care of itself. There are times in fact when I do think of God in this way. I mean, I love the central role sow bugs play in composting, but I don't think any individual sow bug wakes up of a morning and say "hmm, what shall I do today? Shall I run a whole lot of waste through my digestive tract in order to break it down into its component nutrients, or shall I fill out that grad school application? Oh fuck it, let's see what's on the tube." In the same vein, anytime I find myself asking for help from a divine source, a little voice in my head (which I'm pretty sure is NOT the voice of god) says "yeah, sure god can help ya out with this piddly-ass problem ya got goin' on, too bad he/she seems to be dropping the ball on the whole AIDS thing in Africa." (This little voice in my head is frequently a sarcastic little shit. I hate this fuckin' voice.) I know more than one person who looked at this exact dilemma, and found him/herself deciding that atheism was the only sensible response. And I respect that. I don't really have any desire to refute it... yet I don't make the same move.

I don't have a clear explanation why not, but somehow at the heart of the issue for me are words like 'soul' and 'love'. I don't know that I'm ready to attribute a soul to the above mentioned sow bug (maybe I just haven't spent enough time with a single one, you know, having coffee grinds and shitting nutrients or something), but I have many times felt like I've experienced a force of beauty and love that was both powerful and conscious. Frequently I've felt like I was seeing a soul in another's eyes. Nor have those eyes only been human; more than one dog, cat, horse, and even bird has made me believe there is some sort of deep current of somethingness that flows in and through all creation. Strict evolutionists would say that the reason everything is so well balanced and interlocking is because the stuff that doesn't work gets eliminated. And I buy it, I really do. Yet somehow, the sheer elegance of the world, of the universe, the closed cycle, constant rebirth, the nothing-in-nothing-out beauty of it is impossible for me to examine without feeling a welling-up of love and thanksgiving.

Maybe evolution IS my image of god. Maybe I'm a true pagan in that I worship nature in all its ruthless efficiency. Maybe I'll find myself a firm atheist in another couple of years. I don't have any good explanations for why things are so fucked up in the world, that is, why god would allow it. I don't believe in hell frankly, not sure if I believe in heaven or an after life (kind of handy to have hell out of the picture but still keep heaven a possibility, don't you think?), but the acts of selflessness I have witnessed from human and non-human actors, the connections and creations I've seen or been a part of, those moments of beauty that have stopped me in my tracks... I'm just not ready yet to see them solely as the random firings of hormones intent on propogating the species. Funny, but I'd say empirical evidence, that is to say my experiences, is the reason I'm not quite ready to give up on faith.

Just to be clear, I'm not claiming that atheists are all pure materialists with no interest in or explanation for soul or love. I have seen far too many atheists create glorious things, and perform acts of love (starting with my own mother) for me to think such a thing. I just don't feel able to explain MY reactions and experiences in other ways. Even if I were interested in convincing someone of the existence of god, I know this argument wouldn't do it. 'Argument' is probably too grand a word frankly. 'Vague meandering attempt to articulate my own questions', that's a much better description. Some days these questions cause me great despair, but most of the time, like now, they merely make me stop in awe at the mysteries I see around me.