Oh So Much Randomness

Hm. Now it seems my clarification requires a clarification. This could get very meta. Goody.
First off, Torn's question made me realize my dad's comment below might be perplexing others. My whole family uses what Quakers call 'the plain language', meaning we always use the familiar pronouns thee, thy and thine when addressing one another. They're the English equivalent of the Spanish and Italian tú or the German du (sp?).

Seems sad, and telling, that the familiar pronoun would be the one that went out of common usage in English, doesn't it?

Most Quakers don't do it anymore either, and the few of us that do generally only use it with family members (which makes it almost counter to the original intention from back in the 1660s, in a weird way)... okay, I could rabbit ON about all this, but for now, I'll leave it at that. When I first started writing the blog, I considered changing the pronouns anytime I quoted my family members, but doing so always disturbed me; it felt like a violation even. The only way I would ever say 'you' to one of them would be if I was so angry I was ready to cut all ties with him or her forever. So with your indulgence I will always quote them correctly when I write about them here.

Now, on to Joe's question of the carpet matching the drapes... well, even without any modifications on my part, that is never actually true. The hair on my head is a different shade and texture from hair found anywhere else on me, including beard and eyebrows. They're both black, with an increasing amount of grey in them, actually, which is giving my eyebrows especially an odd mangy look. The most recent Advocate tells me that Silver Foxes are in these days, though.

The photo in the entry below, however, was meant to show that I had turned my hair red. That was the sympathetic magic spell; it's very hard for me to be glum when my hair is red. And no Steven, there's NOTHING wrong with red hair, I love it. I consider it a kind of anti-depressant, frankly. (Are you a redhead then? And why is this the first I've heard of it? Take a photo without your damn hat!)

Over the last twenty years I have probably done this maybe six times, the last time being in 2004. I used henna, as I always do, because then the process is even more fun; I'm making mud pies, spreading it in my hair, leaving it there for an hour or more, then washing it out. There is something both primal and child-like in the experience for me. Henna also smells cool, like cut grass, which is essentially what it is.

Usually any time I've done it, the change has been so distinct that there was no question it had happened. This time it doesn't seem to have had quite the same effect. Below is a picture of me before the hair color change. You might recall this image from an earlier entry. 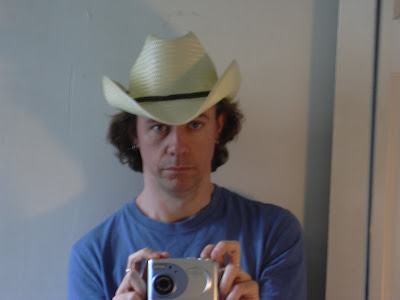 Okay, so the lighting isn't very good, and you can't see my whole head, but you see how my hair is brown, right? Then there is this photo, taken a day or two after I had washed the wet grass out of my hair. 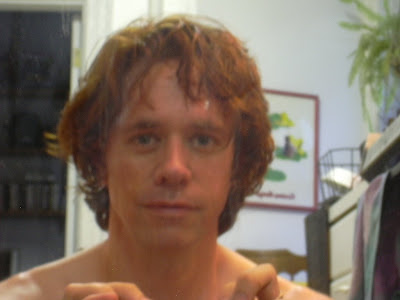 Do you see a difference? No, the lighting isn't much better here either, nor is it the same bad lighting as in the photo above (it's the same bad photographer in both, obviously), but you can see a tinge, right? Right?

Funnily enough, I have been getting identified as a redhead more and more as I get older. Several times entire painting classes have portrayed me that way. "What are you all doing?" the instructor will usually say, "he doesn't have red hair."

When I was still taking Irish, I got identified in class as Pádraig Rua (Patrick Red) to differentiate me from the other Pádraig in the class (two Patricks in an Irish class, go figure). Java, after her visit here, said something about missing my fuzzy red head, and this was weeks before I slathered on the wet grass. The first time I did it, in college, my friend Cathy (a philosophy major, now a philosophy professor) decided that metaphysically I WAS a redhead. Maybe I'm just growing more into my true self. That would be cool.

So far no one, not even my roommate, has said anything about it. I think Dad may have been gearing up to ask if I'd gone red again, but we got interrupted and he never came back to it. It's possible the change is so slight this time that people who don't know me well, if they notice at all, think I'm trying to sneak it past them. Nope, I was going for a big change, a new perspective on life change, a fresh energy, 'wash that man right out of my hair' kind of thing. It's having that emotional effect on me, but apparently it's more in my head than on it. Eh, that's fine. The point is the tranformation, right?

In conclusion, in light of recent events, I thought I'd share this final image with you. 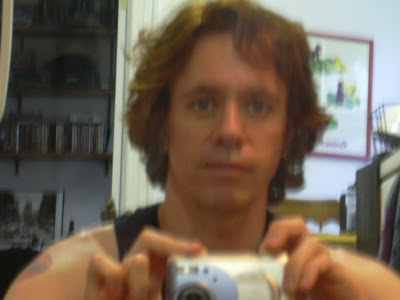 Who the hell is that? I took the damn photo, and I don't recognize him. Nor do I know how I got this weird effect. Sure the image isn't focused, but as has been firmly established long ago, I almost never manage to get photos of people or animals in focus. NONE of the images in this entry are focused. Sometimes cameras just do this. It's weird.
Posted by Patrick at 4:44 PM

You may not be a natural redhead, but it sure looks natural on you. Georgeous!

I've been kept from commenting by spotty Internet, but let me try now:

Love is not diminished in sharing; there is always more. That you choose to find what good you can from this circumstance says volumes about the kind of man you are. It is no wonder that you are part of the circle that formed around Nicky, and I am glad to be a part of it. You have done nothing wrong and therefore have absolutely nothing to be embarrassed about. You have given your heart, and there is pride to be had in being willing to make yourself vulnerable. I for one am glad to know you.

I think I like the henna'd look... I will now forever think of you as a redhead!

And really, what matters most is the inner transformation.

I like the inner dialogue; wash that man right out of your hair.

As for the color of your hair, my impression is that the color isn't a strong traditional red, but rather a deep red ochre. It's mysterious, because if you analyze it closely it looks kinda brown, but for some reason it leaves a red impression on the retina.

I like it. But I'm so fond of you that you'd really have to wander off the reservation before I might say, "Patrick, what did you do?" :) Seriously, you look good! I'm not just saying that!

Love the new do! Thanks for the more in depth explanation. You're a swell guy!!!

See, I guess I was one of those who sensed the metaphysical redhead thing, since I just thought the earlier shot only lovely and not a new tone.

I'm new to your blog, pulled over here by the drama. I'm really enjoying reading your writing, and it's sort of funny, but I thought you looked like a redhead before you henna'ed it. I'm a redhead, (got tortured for it in my youth) but it's faded a bit. What henna do you use?

You must be pressing the button on the camera too hard when you take the picture and moving the camera, I learned that bit of wisdom from taking many blurry pictures myself! ;p

I actually thought you were a dark-ish redhead as well, so there you go.
Yes I am a red head, darker now from the bright orange it used to be when I was young, ugh! For all the perverts, yes the carpet matches. However gravity seems to be pulling the top part down through my head and out my ears, nose and back. :(

I always assumed I was seeing your hair as being auburn in colour. I guess the mind sees what it wants and the memory goes along for the ride.

I think it's funny the problems you have with cameras and focusing them. I have many a picture with part of a finger or thumb in the frame and not remembering seeing it when taking the picture.
( I'm getting better at it, but an occasional digit presents itself in a picture just to keep me from pretending I'm a photographer and it keeps me humble.

Maybe if you didn't use the mirror, the pictures would focus better? And I'm fascinated that you use thee, thy and thine in a natural way with family. I would love to hear a snippet of you talking that way.

I miss your face!! hope I see you today or tomorrow xoxo