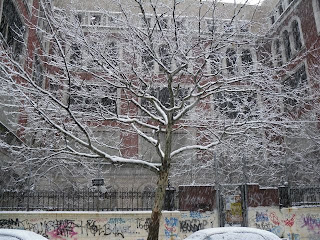 Yesterday as the snow began to pile up, the only thing I really needed to do was go to the grocery store.  Even that was somewhat optional, if I didn't mind making the poor food delivery guy slog through a whole lot of nastiness before climbing four flights to my apartment.  (My roommate says it's somewhat comforting to realize he's not the only one out of breath by the time he gets to the front door.) 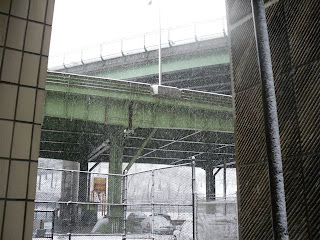 I tend to like snow though, so I decided to head off to buy some stamps, then if I was still having fun, I'd head down to Riverside Park. 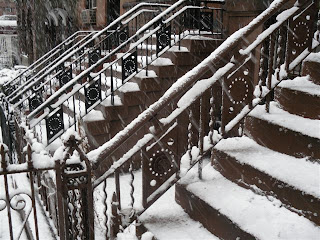 It was late enough in the afternoon that anyone who was out (shoveling supers aside) were probably there, like me, by choice.  A rather cheerful atmosphere permeated, at least amongst the pedestrians.  I think the drivers were having less fun. 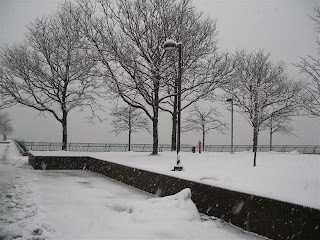 Of course part of our enjoyment no doubt comes from having more space to ourselves than usual.  As you can imagine, this was even more true when I headed down the park.  Even in good weather, this place isn't really on the way to anything.  If you're here, it's because you chose to be. 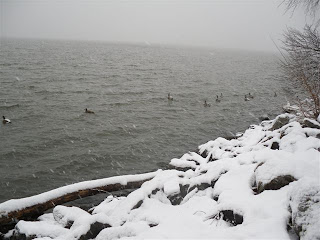 At the water's edge I found creatures who were going me one better in the chilling department.  Ducks and Canada Geese sat in the choppy waters.  I didn't see any of them fishing; I think they just liked being in the water. 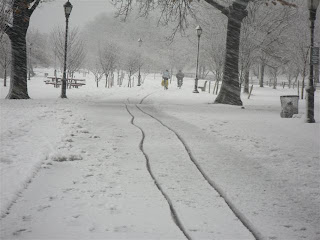 As my face began to hurt from the driving snow, these two bikers passed me.  I was impressed by the progress they were making through the slush.  One of them called out a cheery hello as she passed by.  This never happens in more clement weather. 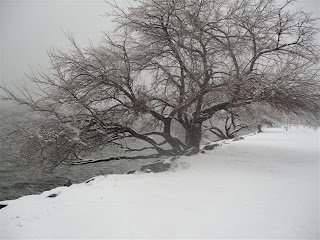 Snow falling on water has always seemed magical to me.  Growing up in Indiana, I always associated large bodies of water with the Summer.  Even if we were going to nearby Brookville Lake (an hour's drive, in my recollection) we only went in hot weather.  Going to the east coast, usually Maine, also usually only happened during the Summer.
My first year of college coincided with a sabbatical year for my Dad, so my parents and brother spent it on Southport Island, in Boothbay Harbor, Me.  That Christmas break was probably the first time I saw snow fall on the ocean.  My seven years living in Seattle didn't give me many more opportunities.  Snowfall isn't common in the city, at least it wasn't back then, and on the rare occasions when it happened, it usually shuts the place down.  Getting down to the water's edge, let alone onto a ferry, would have been more trouble than it was worth.  Being able to walk to the Hudson yesterday was nice, it even felt like a bit of a luxury.
Posted by Patrick at 4:37 PM

Amazing snow blobs in the video. No mere flakes!

Thanks so much for the snowy walk, Patrick. T'was just what I needed.

Riverside took only that one visit to become one of my favorite places in New York. How pretty it is in snow, and quieter, too!

Before I got old, I loved going out in the snow. Not so much anymore. But your walk was lovely and warm from inside. I'll explore this park with you when it's green.

thanks for this baby

Snow and large bodies of water are fascinating. My best memory is Split Rock lighthouse, MN on the north shore of Lake Superior around this time of year. Magical; just like your day!

Lovely winterlude. Some of these shots could be Christmas cards. New York harbor isn’t the ocean, but I have fond memories of watching the snow fall on the water while crossing to Manhattan on the Staten Island ferry.

A ‘blanket of snow’ seem to paradoxically conjure warmth. How easy to imagine curling up under a newly flocked tree in the park... comfortable, content, dreaming the the winter away.