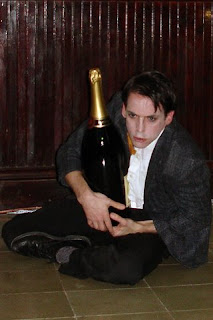 So Wednesday I had what might be close to a perfect day. Beloved Jeff and I drove up to New Paltz, NY to lead a workshop in acro-balance and commedia techniques (the title of said workshop was "Commedia de Acro". Catchy, no?) which was part of the Kennedy Center American College Theatre Festival (KCACTF). I don't know when the "KC" got added to the name, or if that just refers to this particular region's ACTF, but this is the same festival all you theatre geeks went to when you/we were in college. And it was just as fun to visit. But first, the drive there. It was one of those beautifully clear sunny days, when the lack of humidity in the air means everything looks like it was cut with diamonds. Practically the minute one gets out of NYC one is in beautiful scenery, first the Palisades Parkway running alongside the Hudson, then into the foothills of what I guess must be the Catskills (but don't quote me on that). Driving with old buddy Jeff, listening to great tunes, drinking my third cup of coffee for the day, muching on a blueberry muffin, watching the scenery go by, even if this had been the sole activity of the day, I would have been delighted. MAN I love road trips! Why don't I make them happen more often? Note to self: more roadtrips. Daytrips are fine. Taking the Metro North for a couple of hours on the Harlem or Hudson lines would do it even. So that's on the to-do list.

Then we got to the festival. The campus looked deserted because school isn't in session yet, but once we found the central office, we started to see signs of life. When I decided to become a theatre major in my sophomore year (back in '86) I soon thereafter went to my first ACTF... and began to wonder if I could do this afterall. There I was surrounded by people in black, smoking cigarettes, striking a series of poses. Everywhere I looked, people were posing, or laughing a bit too self-consciously. "I cannot spend my life with these people", I thought. Fortunately I soon realized that students of theatre are not quite the same as professionals, and if I've found reason to regret my choice from time to time, it's rarely been due to the company I keep. All of this is preamble to the fact that I saw very little of this behavior this time. Sure, maybe if I were an insecure 19 year old I would have seen things to give me pause again, but mostly what I saw were a lot of nice kids, getting excited about things, flirting up a storm of course, but basically seeming fairly normal, and, well, like teenagers. I even had the pleasure of running into a young woman I know from the Killington Renaissance Faire who is now a junior in college, majoring in theatre design. I've known her since she was 17. One step closer to getting that walker...

Jeff and I had no idea what to expect from this workshop, and found that we weren't going to be able to access our room until just before it was to begin. This made us a bit tense, but you do what you have to. The workshop was aimed in part at drumming up interest in a study program Jeff is part of, that takes students to Italy, where they study Italian and Commedia for a month. If they don't get the enrollment they need, the program doesn't happen, so Jeff was feeling a bit of pressure for this to get a good crowd, and impress said crowd.

Well, we need not have worried. Somewhere in the neighborhood of fifty students showed up. This was actually daunting in its own way, since we weren't sure we could do what we needed to with more than twenty, but we jumped in and did it anyway. The students were remarkably enthusiastic and committed; there was very little standing back and watching, ego-protecting, cool-maintaining, all the sorts of behavior I would expect from this age group, particularly from guys. Maybe I would have seen more of that from high schoolers, or anyone who wasn't already interested in theatre, but in any case, it was refreshingly absent. Sure there was a certain amount of attention-grabbing, people (all guys, now that I think of it) working perhaps just a bit TOO hard to be amusing, rather than involved, but it really was a great group.

The real revelation for me though was seeing Jeff in full on teacher mode. I've always loved seeing Jeff onstage, and have loved even more getting to work with him onstage, but circumstances have dictated that a lot of his acting work in the past five years has happened out of town. So I haven't seen as much of it as I would like. I've been aware of his craft and talent growing and deepening, mostly from the occasional snapshots I've gotten from the plays he's done in the city. But this was my first time seeing him teaching. As most of you know, I believe teaching may be the noblest profession there is. Sure brain surgeon is pretty amazing, I'm glad they're out there doing their thing, but for sheer day-to-day commitment of mind, spirit, imagination and compassion, I'm not sure anything surpasses teaching (nursing undoubtedly is just as good, but doesn't surpass it). Good teachers are life-changers. My father and sister are both life-changers in just this way. I have been lucky to be surrounded by some amazing teachers in my time, so I know where-of I speak.

So here was Jeff. He had brought me along as his assistant, wanting help in demonstrating the two person moves etc. and certainly I had his back with all aspects of the program. But he didn't need me. His explanations were clear and concise, he showed the moves while explaining how they could be used to enliven a production and deepen one's technique, he was funny and charming, hitting just the right note of playfulness and authority for that room, he saw to it that a group energy was generated that created space for people to experiment, play, and push themselves. There were varying degrees of success with each of the moves, but I saw very little in the way of discouragement, frustration or anxiety. The workshop ended with some unsolicited testimonials about the Italy program from previous participants, and an overall feeling of enthusiasm for more of this kind of work, in whatever way it could be achieved.

Jeff, in his usual generosity, credits me with some of this success, and I appreciate it. The fact is, my real talent is for seeing what ain't broke, and then not fixing it. Like I said, I had his back, and maybe knowing that gave Jeff an additional boost so he could sail like he did. But whatever the formula, it was so rewarding to be in that environment, doing real work, connecting with people, seeing them catch the spark of something I've loved for a long time now. It helped me remember that love, since as with all things, it can be easy to grow tired, jaded, or just plain forgetful of why one got interested in all this nonsense to begin with.

The day ended with a nice meal in the cute little town of New Paltz, then a drive back, now getting to enjoy an amazingly clear and star-studded night-time sky. I don't always know how to make it happen, but this day reminded me at least that when a good day comes along, I know it when I see it.
Posted by Patrick at 12:35 PM

Listen everybody: Patrick kicked ass and took names. I may have some degree of joy that I can bring to such things, but P brings the sincere interpersonal connection that--if anything--will get us students in Italy, and made our present students feel most at home on their journey that day. God knows he makes my journey easier, more fun and all-around better every time.