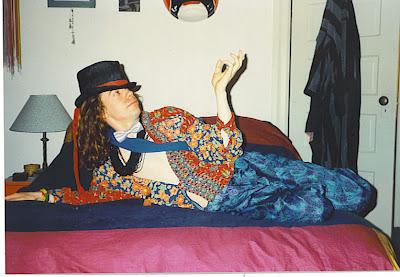 Things I'm thinking about, that don't deserve their own entries, and don't really have much point.

I haven't heard all of Fergie Ferg's new album, The Duchess, but I'm curious; does she (or someone else) spell out a word on every single track? It's like an episode of Sesame Street.

Also, when did she become Fergie Ferg?

If you are starting a brand new massage parlor, or rather 'massage' parlor, I don't really think you should call the first event a "Grand Opening". I'm just sayin'.

I went to a cold reading workshop with a very nice casting director on Tuesday. Lots of useful information, and reaffirmation of old useful information. She made no bones about the fact that 'typing' is a central part of the process, ie. the people you're auditioning for have made decisions about you based on your look and energy from the minute you walk in the door. She recommended that you not waste a lot of time trying to figure out what your type is, but she also said that having a general sense of how you're perceived is a good idea. The gauge she recommends highest is looking at how you've been cast in the past. This seems reasonable, but still manages to frustrate me a bit. I look at my resume; let's see, I've been a dog, a wolf, a ten year old boy, the ghost of a seven year old boy, a several different dinosaurs, assorted insects, three different demons, the Archangel Michael, two rent boys and a femme fatale. Just to name a few. So, what does that tell me?

Then she handed out scenes to each of us in the workshop, implicitly letting us know how she was typing us. I got the role of Marc from "Ugly Betty", the flaming queen assistant to Wilhemina.

Okay there wasn't really anything in the scene that immediately told us he was gay, I only knew he was being portrayed that way because I'd seen the show, so I wondered if I should avoid making that choice, since it seemed like I would just be playing the choices of the actor who got the role. I went later in the session (just luck of the draw) so I watched her tell person after person to avoid 'theatrical' choices, drive the scene, really connect with the scene partner, etc. So, my time comes, I say my lines, I connect with my reader, I keep things understated, there is no flaming of any kind.

Uh uh. That was not what she was looking for here. "Have more fun with the language, this isn't a realistic character, he hates Wilhemina, but wants to be her. Play him gayer."

I flitted, I flounced, I minced my ass off. My voice swept from highs to lows on virtually every line.

She liked it.
No one else was given this scene. Only one other gay role was handed out at all. Maybe I should take note of the fact that she gave that part (also written to be rather bitchy) to a large, muscular, dignified, older black man.

I'm still mulling over what I think of all this. What I think of this role in particular. And how I feel about being typed as a flaming queen before I've even opened my mouth. Whether that's the message I should be taking away from this, and if so, is that a problem? I guess if it gets me work, and doesn't play too strongly on stereotypes, then I can handle it. I think. It did make me uncomfortable. Still does. It still feels a bit like I was boxed in, given a 'type' that most people (me included, apparently) consider quite limiting. I can't decide if that's her problem, my problem, or not a problem at all.
Time to find those gay roles that don't feel like compromises.
Posted by Patrick at 6:09 PM

hi sweet patrick -
I love the randomness of this entry...and the picture-
wanted you to know I moved my blog just a bit - to http://choreographersblog.blogspot.com/
xoxoxo
m

Patrick, this photo RULES more than Genghis Khan. In fact I think it's listed as one of the subentries in the dictionary under the word 'Awesomer Than You.'

What? You trying to argue that 'Awesomer Than You' isn't in fact an entry in the dictionary? Listen, I go to Liberry Skool. I know what I'm talking about.

Thanks for the kudos on the picture, my dears. Would it come as a surprise to you that I was high as a kite when this picture was taken? All that cloth is silk. Yup, it felt as good as it looked. Or, well, it felt really good, anyway.

Hey P. Yes, it seems to me the challenge really does lie in finding the well-written, thoughtful role. Especially when it comes to television. I continually have to face the fact that television types. Type type type. All they know is type. It's like a typographer's convention, the television is. So we'll make our fortunes and run to the next circus show, oui?