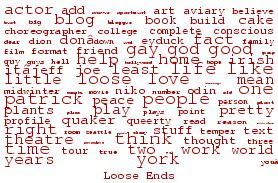 So this is what happens when a computer analyzes my blog to see what words have appeared there most often. The larger the font, the more often I use the word. It's called a word cloud, and it seems like it was custom-designed to appeal to me; there are words, but they're being used as a visual medium.
I wish I had realized the program would include all the graphics on each page; that's the only explanation I have for why every single word from every blog title I'm linked to is included, and all pretty much the same size. So if you want to know what I've been rabbiting on about, look at all the titles I've linked to, take those words out of the mix, and you'll get a sense. I guess it shouldn't surprise me that the epic entry posted immediately below (2/11/07) ended up making a big splash; the names Niko and Dion both made it into the graphic, and I imagine that's why 'god' 'good' and several other words show up as well (though I'm sure they have appeared in other entries too). The other word clouds I've seen seemed to have a greater variety of sizes; looking at mine it seems as if there are only two or three different sized fonts being used. Not sure what that says about my usage pattern.
Love the sequence 'gay god good'. 'Little Loose Love' is also rather nice.
Frankly I was hoping to make some discoveries from this, but so far there is only a single, rather distressing one.
Do I really use 'like' that much?
Oh, Brother Jeff asked for a link to this site; how rude of me. If you want to make your own word cloud, go here. And if you figure out how to make the image bigger, could you let me know? This is the largest size I could come up with on blogger.
Posted by Patrick at 10:51 PM

Can you link us to the source for the rad program, dear Patrick?

Hey Jeff, so I put the link in the entry, thanks for asking. And thanks for the cool Norse one.

Oh, a link--I've wondered just how to make a word cloud for, like, ever!