This is Not a Metaphor 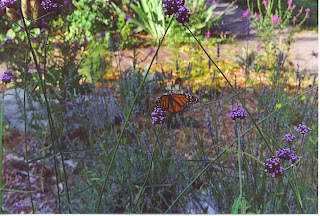 I have too much stuff. Normally this realization is cause for celebration, because I actually love getting rid of stuff. Purging possessions is one of my oddest pleasures, and after eight years in the same place (new two year lease starting today!) it's still not unusual for me to look at something that I've had forever and say, "time for that to go."

The problem I'm facing right now is, I have too many plants. Too many big plants. Ones that have fairly specific needs lightwise. And getting rid of plants is sort of like getting rid of pets for me; not so much in the emotional attachment department (though there is a twinge of that, have to admit) but in the "I can't just throw this out, I need to find it a new home, a GOOD home, with someone who will love it, care for it, and give it all the things I'm no longer able to provide fully."

That sort of getting rid.

The clearest example of this is the angel-wing begonia, a cutting from my mother's, which all started as cuttings from her mother's, so like many of my plants, this one also has a feeling of being a living family heirloom. Sitting on a milkcrate, in order to lift it up closer to the available windows, it's as tall as me. This would be hard enough to deal with, but it's much much wider than I am. This summer I moved it into the living room, near an east window (on a courtyard, but still). It had space around it for the first time in years, I was able to rotate it easily, so as to encourage it not to grow lopsided. For years it had been forced to lean against a wall, never moving, because it had grown so far in one direction and always tipped over without the support. So it did reasonably well for the Summer months in the living room, but as the seasons changed, and the amount of light actually hitting the living room lessened, it got more and more sad and spindly looking. I finally had to move it back into my bedroom, which has southern windows.

The thing is, there I have to squeeze it between my dresser and my art desk, in a room that is already too crammed with furniture. And even there, the plant didn't look like it was doing as well as it could. So now I'm trying to move it as close to the window as it can go, which means my desk has to move into a more cramped, awkward position. I am battling for window space with my houseplant.

And this plant used to be bigger. It was allowed to grow without check for a few years when Brian and I were in sole residence of this apartment, meaning I had access to every single window, including the southern facing ones with deep window-wells in the room that was our bedroom, and is now my roommate's. When the begonia had to come out of there, (where it had grown well over six feet), I was forced to cut it back; I did so with a fairly clear conscience, though, because I dutifully took all the cuttings and set them to rooting, confident I'd be able to find homes for all the new baby plants, because people were always oohing and ahhing over my plants, and saying they'd like cuttings. Except they didn't. Not so much. They'd usually get scared, or think they didn't have the right light, or space, or were always away for long stretches of time, or somehow it just never happened that they would actually pick up the plants, or meet me anywhere to pick them up. It took years to get rid of the cuttings, and by that point, the begonia really needed to be trimmed again, but I didn't have the heart to do it this time.

(Frequently, when the plant has been moved, or when it's lived for a while in an area that isn't quite right for it, some parts have withered or broken off; it's not happened in a particularly shapely way, but at least I can discard those parts off without feeling too guilty.)

So, now I've got a plant that really doesn't quite fit anywhere in my apartment. There are two windows I have access to that give it the light it needs but since one of them is right by the radiator, and houses the air conditioner in the Summer, really there is only one window where it can go. So I put it there today. And am taking a break trying to figure out where to put my art desk, and the plants (three of them) which got displaced by the begonia. All of whom (naturally) really need direct sunlight on a regular basis. I'm resisting finding some sort of metaphor in all this; a natural thing desperately trying to survive in a space that is barely hospitable to its existence, and really only can live in one fairly cramped portion of the whole apartment. Its history is also revealed in some funny ways; over all it's a fairly handsome plant, but if one looks closely, one notices that there are strong stalks, bamboo-like, perhaps an inch in diameter rising up to hold maybe three leaves aloft. Those stalks formed to support much more extensive foliage, but a lot of it is gone now, leaving these superstructures that feel like reproaches to me somehow. The over all dense and lush look of the plant comes from having LOTS of those stalks, wrapped around one another to just the right degree, with just enough leaves, to create the illusion.

Even placing it in the only location in the apartment that is likely to give it enough life doesn't make it happy really. It's stuffed in a corner, meaning there are two walls for it to bang against as it tries to spread its fronds. I think at its widest point it may be four feet in diameter. This is a plant that wants its own room. Or it should be in an office somewhere. A big office, with lots of light, maybe a skylight.

Obviously I love this plant. I love all my plants. But remember, I mentioned this is just the one giving me the BIGGEST problems at present. My roommate has been here for going on three years now, and just recently brought home a couple of plants of his own. He has cared for all of mine when I've been out of town, and like his predecessor, K, before him, he began to fall in love with the plants too. Which led to him getting some of his own. He took his life into his hands though, by bringing in not one but TWO kinds of plants we already had in the apartment, a golden pothos and a spider plant, rather than taking some of the ones ALREADY IN THE APARTMENT under his care. There was no malice to this, I know. I'm sure he felt I wanted MY plants to be where I could get at them, not understanding that I would happily have MY plants become HIS plants, if that meant they were living somewhere good for them, and were no longer making me feel guilty. (K actually did much the same thing; note to self, act less possessive of the plants.)

Where am I going with this? I really don't know (though of course, dear readers, if any of you would like some houseplants...?). Somehow though, an arrangement needs to be found where I can live with my little green pets, where we all have the space and nutrients we need without crowding one another out. Being able to sweep and dust everywhere would be nice too. I mean for me, I'm not expecting them to start cleaning up after themselves. If they could chip in a little for rent, I wouldn't say no, but for now I'm content to let their air purifying, and blood-pressure lowering abilities be payment in kind.

But I still have too much stuff.

Don't look at me. I think I remember to water that plant you gave me maaaaaaybe once every three to four months. I think it's hanging on to life just to plot its revenge.

Dear Patrick, would I be corelessly treading on sacred ground to suggest you could sell your plants? Possibly for a fair amount of money? Also, I am going to my sister's Sunday. Perhaps I can take some off your hands on my way, to finally deliver to her?

Space is a commodity in this city. So is growth, which is an awfully unnatural situation.

Wow, Brian, that plant isn't dead yet? I'll admit, I'm a little surprised. Those golden pothos are even more hardy than I thought. Are you SURE you wouldn't like some spider plants? You know, the ones with the tendrils and the roots and the long stretching runners, all moving exorably to sink their roots in your sleeping flesh? I know how you love them. Lemme know.
Jeff, maybe selling would work, I will look into that. I did have SOME luck once giving away plants via craigslist, maybe it's time to do that again. And yes, Jenny is welcome to as many aloes as she wants.

I think I hear something...

So you got the spider plant I left for you? Enjoy.