Days One and Two: Galway

Mary and I took a bus from Shannon airport to Galway, arriving in the station just next to Eyre Square.  The nice lady at the tourist board office in the airport had said she was perfectly willing to book rooms for us if we liked, but it would cost us a commission plus VAT (value added tax), so she recommended that we just look around for rooms once we got there.  It wasn't high season yet, she said, and she was certain we'd have no trouble finding something easily and cheaply.  This was only the first of many times people went out of their way to make sure we didn't over-pay for things.  In Galway  we perused the couple of guide books Mary had brought along.  We chose a hostel that wasn't too far away, and after booking in there, we went looking for food.

The pedestrian streets around the hostel had an abundance of options, so we more or less chose the Front Room arbitrarily, thinking it looked nice.  We were not disappointed.  Galway, especially the town center, is a city dominated by medieval architecture.  Row houses and shops are no more than two or three stories tall, and built sharing walls on both sides.  This often creates a coziness that is especially nice during the bleak, dank Atlantic-lashed winters.  We could have chosen to eat outdoors, taking advantage of the long sunny days spring brings (the sun set around 9pm), but were more in the mood for cozy.  Good hearty food, including a salmon sandwich, seafood chowder, beer, cider and tea all helped restore the inner person. 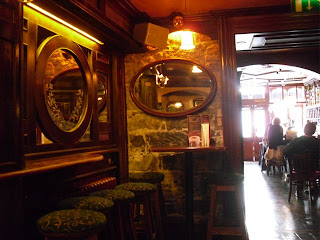 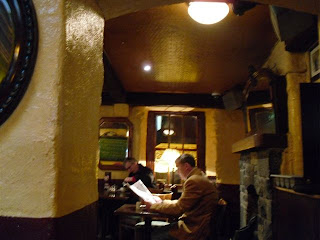 I hadn't really taken in how light it was where we were sitting, despite the fact that we were in an inner room far away from windows.  It was only as I gazed lovingly into my teacup that I realized we were directly under a skylight. 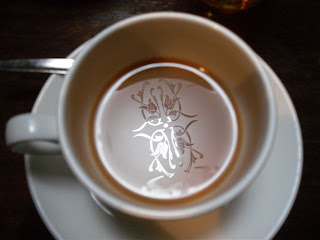 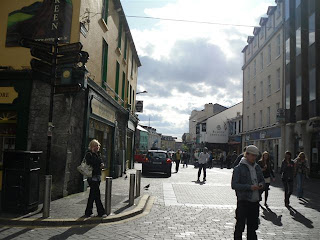 Still broad daylight outside, as you see. 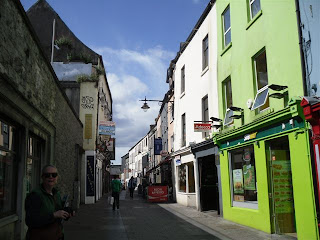 I've always loved the free use of color I've seen in Irish houses.  I imagine this is another way of combating the  harsh bleakness of Winters.  Some Seattle houses experiment with color too, but it's usually just one or two, never whole neighborhoods as one sees here. 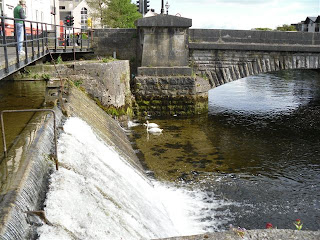 Food taken, Mary and I were now ready to stretch our legs, having been sitting for hours at a time since getting to Kennedy the night before.  We stumbled across a walk that follows along the river Corrib, running through the city out into Galway Bay.  It was here that our two week discussion of which houses we wanted began.  There were a certain number of new structures cheek-by-jowl with medieval ones still in use, as well as a handful of abandoned shells we weren't ruling out as fixer-uppers.  Someplace with a view of the river and the bay would be nice.  We also saw our first swans here, a single mating couple (look where the bridge meets the walkway; above you can see Mary too.  Hi Mary!).  I have a soft spot for swans, in part because I first saw them in Ireland and the UK when I was seven years old, so they still have an air of romance for me, being associated with castles, fairy tales and picturesque scenery.  And keep in mind, I grew up in landlocked Indiana, so even the ocean was a revelation, and my first views of that were also here.  Anyway, I took a gazillion shots of these two swans, only to find later that in the bay there were more than thirty of them, receiving handouts. 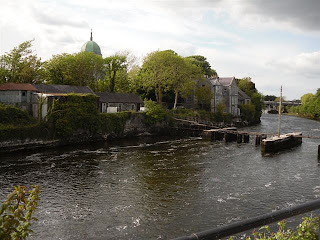 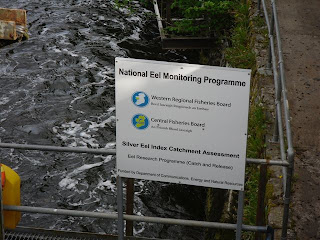 This is a big hot spot for eels too, apparently.  That's nice. 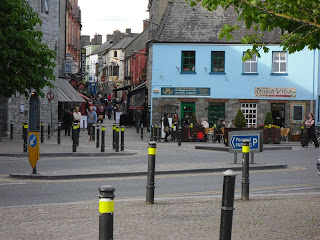 Another view of one of the walking streets.  Pura Vida, the cafe in lower right, was a favorite spot, which is to say we went there twice, the second time when we were just in Galway for a couple of hours between buses. 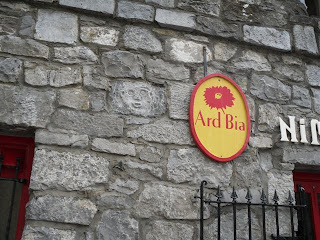 I love the fact that I don't know if that little face next to the sign was scratched into the stone last week, last year, five years ago, or five hundred.  Frankly I assume it's a fairly recent addition, but I don't know.  Ard Bia translates as 'high food' but I haven't the slightest idea what that phrase means.  Does it refer to high tea, or is it a claim that this place is really fancy-shmancy?  Anyone? 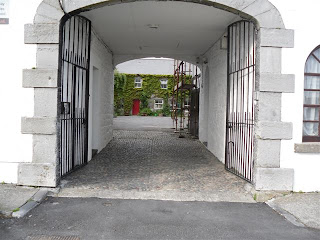 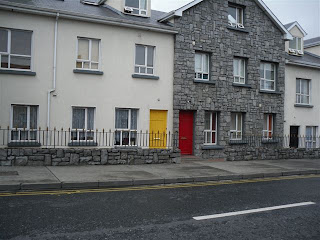 "To get to my place, just keep walking up Tuam Road until you hit the yellow door.  If you see a red door, you've gone too far." 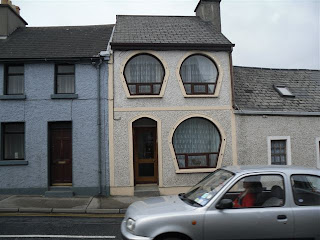 I love this horseshoe house. 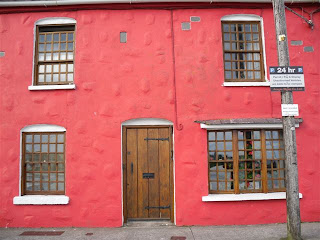 I took a gazillion photos of this house too. 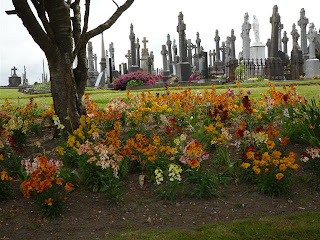 Lest we forget, this is Catholic Ireland. 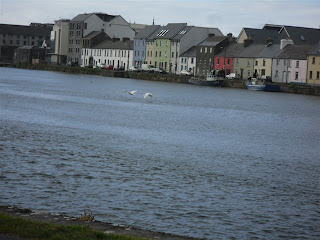 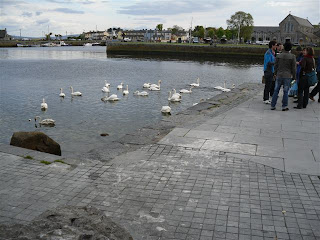 See what I mean?  And this is only part of the flock. 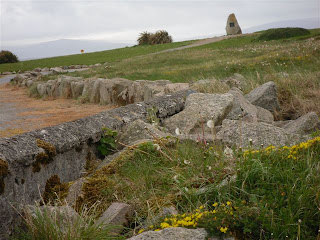 My suspicions about this monument rock turned out to be accurate.  Conversations and memorials about An Górta Mór, the Great Hunger - the famine that devastated Ireland during the 1840s - are fairly recent developments.  A paralyzing shame and silence covered the country for years afterwards, and many people believe (myself included) that this horrific time fundamentally changed the Irish psyche.  I think I've mentioned an amazing book I came across a few years ago called Irish Hunger; Personal Reflections on the Legacy of the Famine.    (Note: the link takes you to a title that isn't quite the same as my copy. I assume this means it's a more recent addition, or maybe there was a change of title for the American version, as there often is.)  It's edited by Tom Hayden (yes, that Tom Hayden), and I found it fascinating, moving, and more than a little enraging.  Here in Galway Bay a simple standing stone and plaque commemorates the thousands of people who left Ireland from this harbor, most of them forever, to escape the potato blight, famine, various plagues, and what some might call the genocidal response the people in power brought to the disaster.  Simple gestures like this may not seem like much, but for many people, this is helping to bring great anger, pain and ugliness out into the light for the first time.  You should be able to enlarge the photo, if you want to read the text. 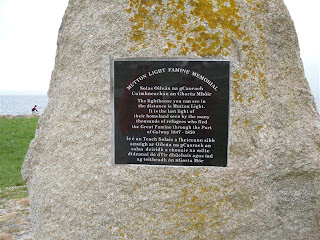